Looks like it was “taken down” by Google on July 1.

I’ve changed our Google Play Store target audience to be 18+ and up: The target age group for your app is: 18 and over

I’ve put up a change that will make any requests stream-app makes to https://resonate.is will open in the user’s browser, and not the app. This should make Google be okay with the donations page, as it will no longer be “in-app”. This will only affect Android users, iOS users will still be able to navigate to resonate.is pages.

These should hopefully address these two issues:

Fingers crossed that these two quick fixes appease Google Play Store. The new app bundle has been submitted to them and is currently pending their review.

I think the move to a new framework as expressed bellow is currently in a very rough state because @piper and @psi won’t be able to really do the work until the 1st week of August (could be until the 8th of August, maybe slightly earlier). So we might want to wait then to do a proper call for developpers but I’ll leave that judgement call to Piper and Psi.

This new repository will be built completely independent and unreliant Resonate’s web player, which should allow us to tackle a wider featureset than we could given the previous implementation.

Furthermore, as it stands, Piper, Psi and @jeremy do not currently have access to the Resonate server which is limiting to do the work they need to do and we’re waiting on @auggod and @peter to walk them through the process of having complete access to all the resources they need, which I think should be sorted before early August so that they can start right back on it when they’re back.

If anyone knows any developers who might be interested in assisting - again, this is going to be written in React Native and TypeScript - send them on over to the new mobile repository and have them take a look! Thanks everyone!

Note that all I’ve mentionned above was just a short summary of what’s been discussed and decided collectively at the dev stand up meeting two days ago in the presence of @brndnkng and @Hakanto as well ! Hope this helps !

Also incidentally @jeremy just posted this which is I think the single most important document about how to further proceed with Resonate dev work : 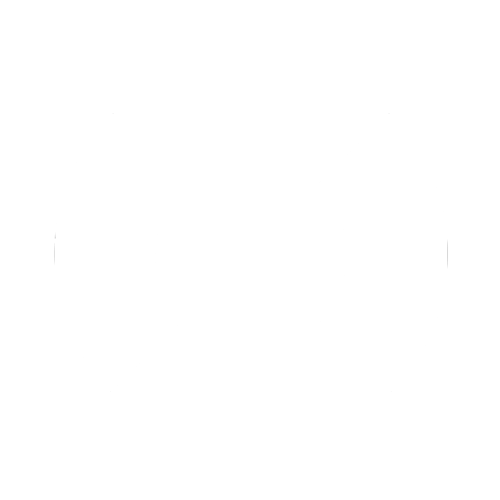 Some proposals to improve product development at Resonate

Hello everyone, A quick intro for those who don’t know me. Hi! I’m Jeremy. I’ve been in the tech industry for almost 20 years as a developer, company founder, and now consultant. Originally I’m from Seattle, but have been in Berlin for the past 3...

Currently mobile and desktop apps are blocked by the v3 API (the API works for logging in but it seems that streaming tracks using it doesn’t spend any credits… not ideal).

@jeremy has this proposal which @psi and I think is a great next step - we’d like outside devs to weigh in on it and potentially get involved in helping with that if the proposal is approved. We had an awesome Dev Standup Meeting last Wednesday with brandon and Peter H and a bunch of others on the call that was really productive when we discussed this and the current blockers, and we collectively decided on the call that it was time for @jeremy to post his proposal publicly.

Maybe something like the following would work for a succinct social media post to attract more devs:

Resonate has a new tech-related proposal on the floor (Some proposals to improve product development at Resonate) to consolidate and simplify its back-end infrastructure. We would like to invite devs to provide initial feedback on the proposal, and to get involved and assist in this work.

@zetto.plus, let me know what you think about all of this (I know this is a lot to chew on). Thank you so much for your efforts and your continued pushing to do socials and to bring more devs on board (which we definitely, desperately need).

In other news, @relish and other Android users, Google has reinstated stream-app in the Google Play Store! Give it a whirl and let me know if you run into any issues, but it looks like we’re back up and running from what I can tell over here.

Because the forum now lives at https://community.resonate.coop (part of 🚧 Warning: Resonate Infrastructure In Flux Coming Week(s) [Effective Immediately]), I’ve created a new release of stream-app to allow users to continue to navigate and use the community forum in-app, instead of it automatically opening in the user’s browser. For those who don’t know, you can scroll to the bottom footer (or even quicker, press in the top right, click Settings, and because it’s a shorter page you can get to the bottom quicker) and press Forum - you can actually browse the forum using the app! I like doing this because it provides a bit more screen space (no browser URL bar at the top) and a more focused experience.

These new builds have been submitted to Google Play Store and Apple App Store, and are currently being reviewed - should be live sometime tomorrow.

Thank you @piper for pursuing this app so diligently and keeping the community in the loop via the Forum.

Minor note: I’ve updated the topic above as well as the stream-app’s Readme file regarding its development status - initially I stated that development on the repository would be discontinued in favor of the mobile repository, but I’ve since realized that’s an incorrect characterization - it’s essentially in maintenance mode (we will continue to fix bugs as they arise and fix problems where possible). The repository is essentially as feature complete as it can be within the confines of the react-native-webview library, so new features aren’t really possible without switching to regular react-native (the goal of the mobile repository).

Just wanted to post this clarifying update/edit to make sure people are aware that we’re still currently supporting and maintaining the stream-app while mobile (our long-term goal) is being built out.

disable smooth scrolling. Feels like scrolling to a point where I didn’t intention it to be scrolled to.

I’ve responded on the issue, but I’ll copy paste my response here as well:

At first glance, I would have though this issue pertains:

However, we are not using androidHardwareAccelerationDisabled, which was causing the problem for the users in that issue.

In the meantime, I will try to experiment with bumping the react-native-webview version to the latest to see if that solves that for you. Here is the latest release, version 20 on Android (1.2.0 for iOS). It has been submitted to the Google Play Store and Apple Stores for review, and will be available publicly after they are past review:

Thank you for reporting this issue!

@pabloscloud, 1.2.0 is now live on Apple Store TestFlight, if you want to test and let me know if those updated packages fix your issue:

I noticed on GitHub that you said you’re on iOS 16.0 which is due to be released this fall (in beta). Sounds like this could be because you’re on an iOS beta release instead of a stable version? When you open stream.resonate.coop in Safari, do you have the same issue?

@pabloscloud New release here, should be available for testing via TestFlight sometime today after it’s been reviewed by Apple: Release ios-deceleration-rate-normal · resonatecoop/stream-app · GitHub

Crossing my fingers this fixes your issue.

Hi, I got the app update last night and was asked to take a screenshot and send it to the dev, so here it is

Awesome, @Sylvia, thank you for posting this!

Pleased to mention that @pabloscloud said that their scrolling issue was resolved today, handled by one of the fixes associated with v1.2.1. Also, we have a new release queued up:

The new login associated with our migration off of Wordpress routes us through a new URL (https://id.resonate.coop) for login in the player, I’m adding that new URL to our list of allowed in-app URLs, so users can once again log in in stream-app. I’m submitting the new release to app stores, pending review people from Google/Apple, the update should be available in the next 4-48 hours to everyone (it’s available immediately for those able to install binaries on their mobile devices here).

Delighted to share that the “Learn” menu dropdown being non-functional for iOS is FIXED on the production server! To be clear, this fixes the menu and allows full functionality for mobile/iPad iOS users in all browsers and for iOS stream-app users. 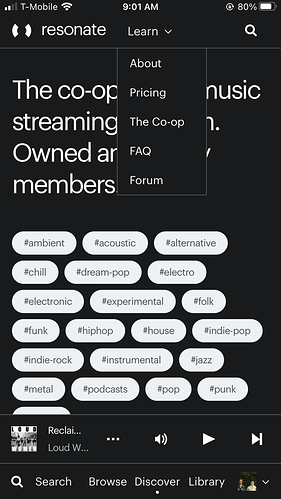 We’ve also been pushing out a bunch of other fixes for the player (which also fix things for the mobile app) just to handle things associated with the transition off of WordPress. Special thanks to @auggod and @psi for all of their hard work on this.

You’re wonderful, I’ll give this a try when I can.

A couple of updates:

Hello everyone! We’re running into an issue with Google Play, that we need to address by October 6, 2022 to keep the Android app online. This Google Play tester was able to navigate to this page in the Android app, on what appears to be a tablet, and was able to open the Open Collective contribution page in-app. This shouldn’t be possible because I’ve intentionally excluded Resonate’s Open Collective from our allowlist, which should force all links to this domain to open in the user’s browser (and not in our app), merely to appease these Google Play payment requirements. Here’s a screenshot of where the tester was able to see this screen: 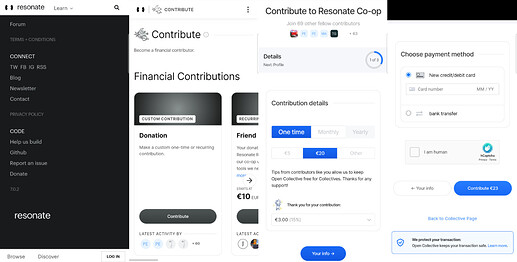 I’m unable to find a way to navigate to this screen in-app or in browser. If anyone has any luck poking around in-app and can get this screen to come up, can you please post here the steps you took and the pages went to and links you clicked on to make this appear? If this screen opens in a new window / separate browser on mobile, we’ll be good by Google’s book, from what I can tell. But, if I can’t reproduce the situation myself, it’s really tricky for me to try to figure out how to fix it. Thanks in advance for the help everyone! We have a couple of hundred active users for this app so it would be great to keep it up and running.

Here’s the full report from the Google Play Store for posterity:

After a recent review, we found that your app Resonate (com.resonate.streamapp is not compliant with one or more of our Developer Program Policies. Please resolve the issue described below by October 06, 2022 or your app will be removed from Google Play.

Issue with your app
Your app contains content that doesn’t comply with the Payments policy. Please see the attached screenshot for more information.

We found an issue in the following area(s):

Eligible developers have the following options to offer an alternative billing system in select countries for non-gaming apps:

I couldn’t find any possible way to access that screen. However the screencap is v7.0.2 and I’m at 7.1.7 and I notice that my “donate” button just doesn’t link to anything anywhere which is where I would expect to have a link to opencollective? However since that doesn’t work (it does get me out of the app though just it points me to an error 404 page) I can’t find any other way to stay in app and have access to open collective.

1 Like
← previous page next page →
This site is the official community for Resonate, a streaming music cooperative owned by the people who use it -- artists, labels, listeners and builders.