Framework Session 1: How a collaboration framework can help

This session is over. Thanks for all who came out! Keep an eye out for the next one on September 17th.

This session we’ll explore how a framework like Kielest will help us achieve our mission. Why have many volunteers left after only a short time? Why have so few of those who have expressed interest been onboarded? Where have the problems been?

A premise of Kielest is that problems are more structural than personal. By coming together, we can explore and identify patterns which have created problems. Kielest’s goal is to replace these negative patterns with new positive ones.

After the call, we’ll have some open social time on Topia where folks can casually chat about their experiences at Resonate, discuss Kielest, and get to know each other. The link will be posted here after the call.

Hey y’all, I’m Hakanto, one of the @directors on the Board at Resonate. I’ve served in many working roles at the co-op – often too many at once!

Reflecting on my experiences and what I’ve heard from other work contributors, I’m proposing a new framework for how we can set goals, organize working groups, and a lot more. Over the past couple months with @ode12 @jeremy @psi @piper @LLK and others on Mattermost, I’ve refined the presentation.

Uh oh. Will this be more work?

Nope. In fact, I believe Kielest will save us lots of time. Here are key outcomes I anticipate within the first few months of kickoff, with minimal effort needed.

So how is this intended to happen? Well, here’s an overview diagram of key ideas in Kielest, leaving out details in the proposal so you can get the big picture. Give a gander! 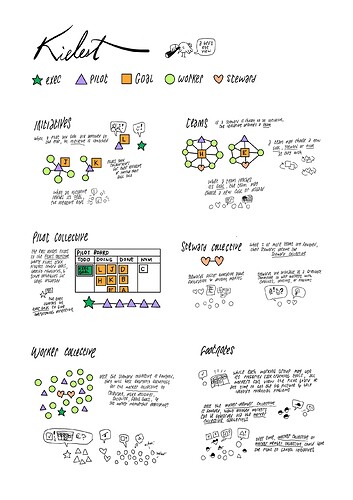 Here’s the proposal – a more detailed 13 minute read with supplementary materials if interested. Share your thoughts as comments in the doc, or below this post where more folks will be able to reply.

The Kielest framework is pitched to @brndnkng in his role as Exec, to current @workers, and to you!

Through September, October, and November, Community Strategist @ode12 and I will be hosting meetups to explore and come to agreement about parts of this proposal. There will be two calls each month, on the first and third Saturdays.

this is going to be monumental i cannot wait for us to dig in!

also heads up everything is super flexible with this framework- including the name! hahahaha

Yes, the name is a placeholder. Fun for me to have an excuse to use some Esperanto though

Better to have a name than no name to get started!

Can’t wait to meet up with y’all and explore these ideas together! Been working on them a long time!

Very excited to join in on the first meeting and discuss this. Call it Kielest or call it anything but I feel that discussing the framework for group organization of work / accountability / achievements / sustaining individual and collective efforts / and refining decisions making at resonate has been long overdue and it’s really exciting to see it happen, very grateful to people like @hakanto and @ode12 for their work, scrutiny and openness on this and for @brndnkng to give the go ahead so that we can further explore it.

The other working title I had was Pasamanos. Apparently means handrails or bannisters in Spanish. (and easy to say and spell)

I like the imagery of a framework being like handrails, bannisters, balustrades. Not something to hold you back but something to hold on to for support, to lean on and rest yourself against, to keep you on track, (maybe keeping you from falling off the stairs lol).

A bannister also can gain a patina with time – a wear and luster as many hands have passed along it. I love that this framework too would patina – shaded, smoothed, and strengthened by use.

But my Spanish is quite limited. If Pasamanos doesn’t have some ridiculous second meaning, let me know, and we’ll have one more naming option.

Naming things is special. We’ll have a vote! Pitch your own names! (read the proposal first tho)

A shoutout to those at Resonate I’ve worked beside during my two years here.

A shoutout to those who contributed in the past.

A shoutout to those who said hi but haven’t had the time or opportunity to get more involved.

I’m inviting you to read this collaboration proposal that I and others have put together with the goal of us having a better way to coordinate, build, and care for each other at the co-op. It also will make it much easier for all members to know what current projects and goals are.

If you’re interested in participating in the upcoming meetup, please complete the poll to pick a time for the September 3rd meetup. And keep an eye out for more calls over the coming months!

If you have the time to share your experiences and feedback – whether or not you plan on volunteering in the future – it would be wonderful to hear from you and get to say hi and thank you.

Hey! Thanks for the tag. Yes, I’m still definitely interested in volunteering but I haven’t been able to connect with an engineer since my last (first and only) post here. I figured my help wasn’t needed

Unfortunately I’ll be traveling on Labor Day weekend and won’t be able to attend, but would be happy to spend a few minute looking at the doc and sharing feedback, if you’d like.

Hi, @tagine, it would be wonderful to hear your thoughts on the doc! Thanks

It sounds like you’re looking to contribute on the developer side of things. We always need help in that area, and yours would be much appreciated! Since your last post, a lot of organization has been done. Some highlights:

We’ll have more Kielest calls throughout the next few months. Hope to see you at the future ones. If you have any questions about dev stuff, tag @maintainers on any post and they’ll be able to say hi.

I’ve been dreaming of meeting folx with some similar ideas. I’ve been slowly trying to start something I call Open for Product, where the general idea is a framework/platform that enables working together in sort of ad hoc agency groups for creative and professional work with equitable value management and distribution. I’m looking forward to learning from this group, and just working with others who work with clean collaboration processes.

I hope my contributions can be valuable too! Years in product design and product management as well as a comp sci background and a current career move into dev.

Anyway, for this specific meet up, I may have a change in plans for the 3rd, but I’ve made a selection for what currently works best for me.

Looking forward to meeting some of you, and learning more about this. Really appreciate the work that went into this so far! Wow!

Hey @primevaldad glad to have ya here. Just checked out your profile – very cool to hear you were in Platform Coops Now at the New School in collaboration with start.coop and Mondragon University. I look forward to hearing about that!

If you can’t make it on the 3rd, there will be opportunities at the other sessions too so mark down the first and third Saturdays as a placeholder. Thanks for checking this out and sharing about your skills and interests.

Our hope is that with this framework, folks like yourself and @tagine will be able to easily find and jump into initiatives at Resonate, or even pilot your own projects so others can learn from you!

Unfortunately most of my training and experience is in kanban, scrum, and agile. Not familiar with Kielest but curious what methodology or framework it most closely resembles.

Kielest is a system we’re going to experience and put in place together to have a framework for the very peculiar organization of workers at Resonate and its specific dynamic so if you’re not familiar with it, it’s very normal! We’ll have sessions with @Hakanto and @ode12 (which I’m looking forward to myself!) where we collectively discuss it to make sure it works best for everyone, it makes sense for the coop, it’s aligned with our ideals, our manifesto, and it answers the difficulties we’ve met over the course of the last years (which are the reasons why, for example, you couldn’t find answers to your questions when you first came here in March !). I think quite a few people here are familiar with agile, scrum and other frameworks of that type so it’ll also be interesting to discuss how and why Kielest is different, and also if there are things you liked or disliked in your previous experiences using Kanban, Scrum, or Agile, it’d be great if you could share that with us as it’ll be helpful pointers as to what we can draw inspiration from and/or what would be good to change or approach differently.

Just read the doc. It looks good to me. I can’t commit to the meeting this Saturday, but if I’m available I’ll join.

also as time and your capacity may just be super limited, async notes also are super important to this process, so if you feel like you can just share some sentences in regards to meeting notes please feel free!

It’s very true, it’s actually essential to precise that anyone should be welcome to share opinions here if they can’t attend the sessions, but still want to help / participate and either have questions or things they want to share about their own experience (here or elsewhere), we can’t except everyone to be available for those meetings and we still have to take into account the opinions of those who can’t be there.

I have read through the proposal a few times, but I’m holding off from commenting until after the first session, where I hope to get a better sense of it.

One thing I will say is I’m really happy to see micro-solidarity as part of the framework. Trust scales much slower than organizational capacity so it’s good to have ways of organizing that are reflective of that.

Please RSVP above at the original post. The link to the call can be found there.

Inspired that y’all have been checking out the proposal! Looking forward to seeing you this Saturday. Here’s my thoughts for how we can spend the time together. Does this look good to you?

Breakout convos into small groups until 0:20

Consent to design premises until 0:55

Hi y’all! The room is open so come on in

You have been invited to join Framework Sessions using BigBlueButton. To join, click the link above and enter your name.

We’re gathering now on Topia for the afterparty/picnic/hangout.

On Topia, you can wander around to chat with folks in a little cute world. Click to move around, or use the arrow keys.

If you zoom out on your browser settings it can make it easier to navigate.

2 Likes
next page →
This site is the official community for Resonate, a streaming music cooperative owned by the people who use it -- artists, labels, listeners and builders.